If you are reading this, you may already know that I am a principal investigator founding a new laboratory at Charles University in Prague, Czech Republic. I have received support worth approximately 12 million Czech crowns (around 465 thousand Euro) for carrying out my research for the next three years. That is not bad at all. For 12 million crowns, you can have 300 thousand pints of Czech lager (the best beer in the world, by the way), buy a flat in the Kensington-equivalent of Prague, or – if you wish – pay the salary of two academics for three years and equip an optical laboratory. Unfortunately, Charles University gives the money only for the last option, so here I am sitting at my desk, typing this text that will hopefully attract you to my research by the time you finish reading.

So, what did I get the funding for? For the idea of “making a white dwarf star on Earth”! Does that sound crazy to you? Well, not insane enough to not be supported by the prestigious PRIMUS Research Program of Charles University that “aims to encourage young researchers with international experience to establish new research groups and laboratories’’ (as stated on the official website). “Making a white dwarf on Earth’’ may sound impossible. However, I am not suggesting shooting a rocket to the nearest one (which happens to be just 8.6 light years away, by the way) and dragging it back using a rope or something like that! What I truly desire can be encapsulated in three words: “construct”, “confine”, “capture”. To construct a machine that confines the white-dwarf-like matter and to capture its images.

You will hear more about this program of three Cs once you join my group. Here, I would like to tell you why I want to make the white dwarf star on Earth, namely on the ground floor of the building at V Holešovičkách 2, Praha 8, Czech Republic. To begin with, I should admit that I have not been too precise when talking about making white dwarf stars. What I really mean is to make a kind of simulator that mimics the behaviour of the matter that can be found in cores of white dwarfs. A white dwarf is basically a dying star developing an immense pressure on its core that strips electrons off the atoms. As the heavy nuclei have nowhere to go, they form a crystal-like structure while electrons occupy quantum states common to all the nuclei – they are de-localised. Being a not too friendly sort of fellow, electrons do not like to occupy the same quantum states and complain (a lot) when someone wants to squeeze them into a tiny little space. That prevents the star from collapsing into itself – quantum mechanics, the bro code of little particles, is mighty! 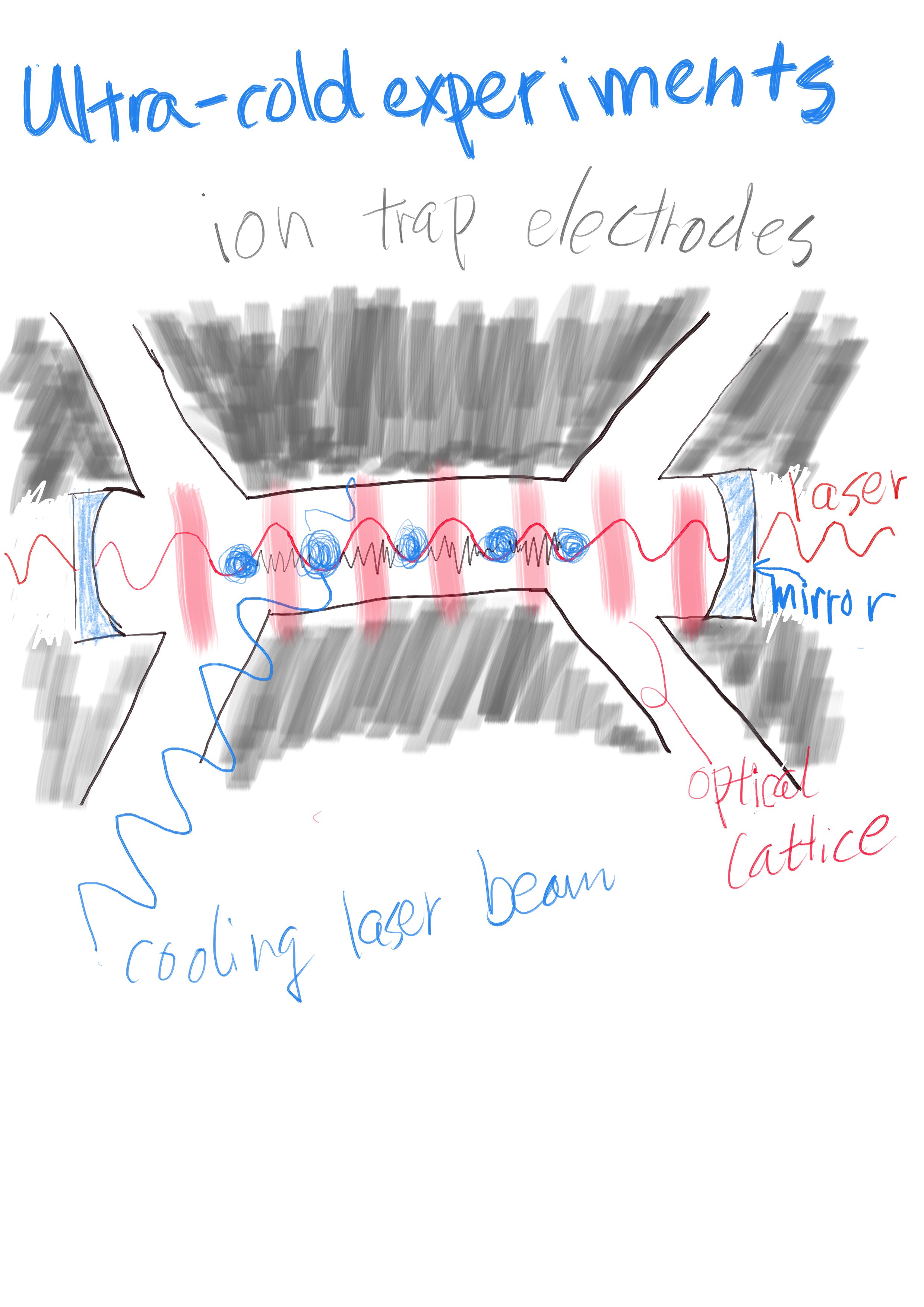 Now if you look back to Earth, you can find something similar in the coolest laboratories that humankind has. I mean, literally, the coolest, for scientists there take ions – detaching electrons from alkaline earth metal atoms – and cool them using lasers to fractions of degrees above absolute zero. If the ions are confined in a device called a “trap”, they form a crystal-like structure – a Coulomb crystal – because they have such a low kinetic energy that will not allow breaking of the electrostatic “springs” that are binding them to the neighbours. The Coulomb crystals made of ions are nowadays used in the sexiest branches of science: they are employed in quantum computing, quantum sensing, quantum simulations, and quantum control.

You may have heard of some of the terms I have just used. People believe that qubits in quantum computers will replace bits in all supercomputers in the world one day. Quantum sensors will be seen employed in mineral prospecting, seismology, little nuclear magnetic resonance (NMR) devices and radars in the next decades. In quantum simulations, one takes an equation from a theory describing the superconductivity or phase transitions in solids, for instance, and maps it to a mathematical description of the motion of ions in the Coulomb crystals, sometimes immersed into an optical cavity filled with standing electro-magnetic waves. Speaking more specifically, in this kind of simulator, electron spins are replaced with qubits, the spin precession in the magnetic field is described by qubit oscillations induced by lasers, and the Coulomb interactions between the ions are said to be analogous to the interactions between bosons. OK, we are getting quite generous with analogies, aren’t we? Honestly, it sounds to me like the famous scene from Monty Python and the Holy Grail where villagers come to the conclusion that a woman they have captured is a witch as she can float like a duck, which is like wood, and one burns wood, and one also burns witches… (If you don’t know what I am talking about, google it – it is worth watching!) But seriously, many intelligent people are working on this because it can give us the knowledge of how high temperature superconductors may work.

Getting generous with analogies… (Monty Python and the Holy Grail)

I have been talking about superconductors and solids but only ions have appeared as physical entities in the story so far. So, where are the electrons? Well, thanks to the analogies mentioned before, none should be required but wouldn’t it be better to have them? Artificial Coulomb crystals are, after all, crystal-like structures that are common to many solids: the electrostatic repulsion between the ions is outweighed by the confinement field instead of chemical (metallic) bonds, so if you add electrons, you have the metal – no “analogies” needed anymore! Unfortunately, adding electrons is easier said than done, because confinement fields in traps are not suited to caging two particles with diametrically different masses and charges: the lightest atomic nucleus is more than 1800 times heavier than an electron, and both have opposite signs of charge. And there is still no end of trouble. The distance between ions in Coulomb crystals is typically more than 10,000 times larger than in metals; one would need to delocalise the electrons over this distance to form the metal-like substance. In order to do that, the electrons would have to be cooled to less than one thousandth of a degree above absolute zero! While reaching this temperature for ions is a relatively common thing nowadays (as mentioned before), electrons are not easily affected by standard laser fields, so different cooling mechanisms must be employed.

But imagine! The solid magnified 10,000 times, the structure of which could be shaped and manipulated by electric fields and lasers! What one could do with that! They could be used to:

Coulomb crystal image captured in Brianna Heazlewood’s lab at the University of Oxford during my time there.

Did you notice something? I stopped talking about simulations and started using the word “controlling”. So here we have quantum control, the last item in the list of quantum technologies! Nowadays, one usually means controlling chemical reactions between atoms, molecules and their charged variants on the quantum mechanical level when speaking about this specific research direction. There are a few research groups trying to pull quantum mechanical strings of molecular marionettes and I can tell you it is interesting work – I was a postdoc in one of those groups (at the University of Oxford), so I know what I am saying. But “a few” is more than one and it is not in my nature to follow the crowd. Why should we limit ourselves to the cases of molecules and ions? Why not electrons (and ions)? The limitation is given only by the experimental technique. Come to my group and show that we can break this barrier! I dare you!

Looking forward to hearing from you. Yours faithfully

You May Also Enjoy

In summer 2020, I got a message from Charles University in Prague that I have won an institutional support for conducting my research in the field of ultra-cold plasma physics at the Department of Surface and Plasma Physics. The 3 months that followed this news were cruel as I had to decide whether I take the offer or stay in a well-paid job of an optical engineer in the automotive industry.

My grand gap: What I have learnt from my unproductive years

The past three years in Oxford have been very busy for me. I received an award from the Department of Chemistry for managing a research project independently when my superior was on leave. I won Oxford University’s poster prize and was selected to present my research in the British Parliament. I co-authored two publications and two more are on the horizon. I am building a huge apparatus that is 95% based on my ideas. So, I have completely forgotten about the skeleton in my cupboard: three unproductive years at the University of Freiburg.